FROM FORCES TO FORMS 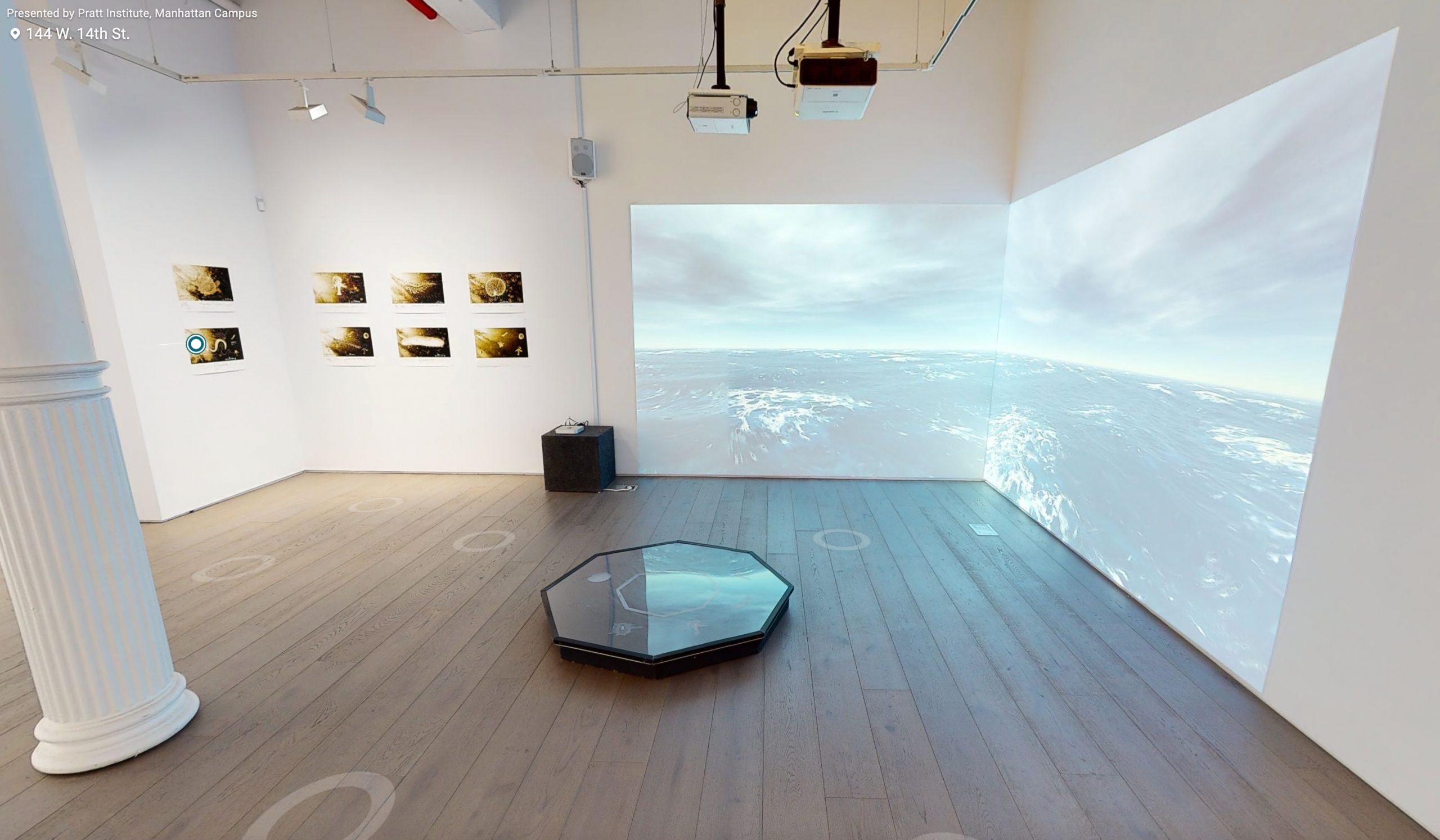 “From Forces to Forms” critically explores how artists and designers can generate vibrant forms using experimental media and processes derived from principles of complex organismal development. The exhibition considers the implications of form generation in a variety of media and in several different contexts, including ecosystems, materiality, evolution, and the origins of life.

“From Forces to Forms” is curated by Ellen K. Levy, a multimedia artist, and writer known for exploring art, science, and technology She is a past president of the College Art Association who has exhibited internationally and published widely. Relevant to this exhibition, she co-edited with Charissa Terranova an anthology on D’Arcy Thompson’s influence on contemporary art, design, and architecture, published by Bloomsbury Press.

The exhibition received a grant from Pratt’s STEAMplant, an initiative to foster interdisciplinary collaboration.

OUR TIME ON EARTH 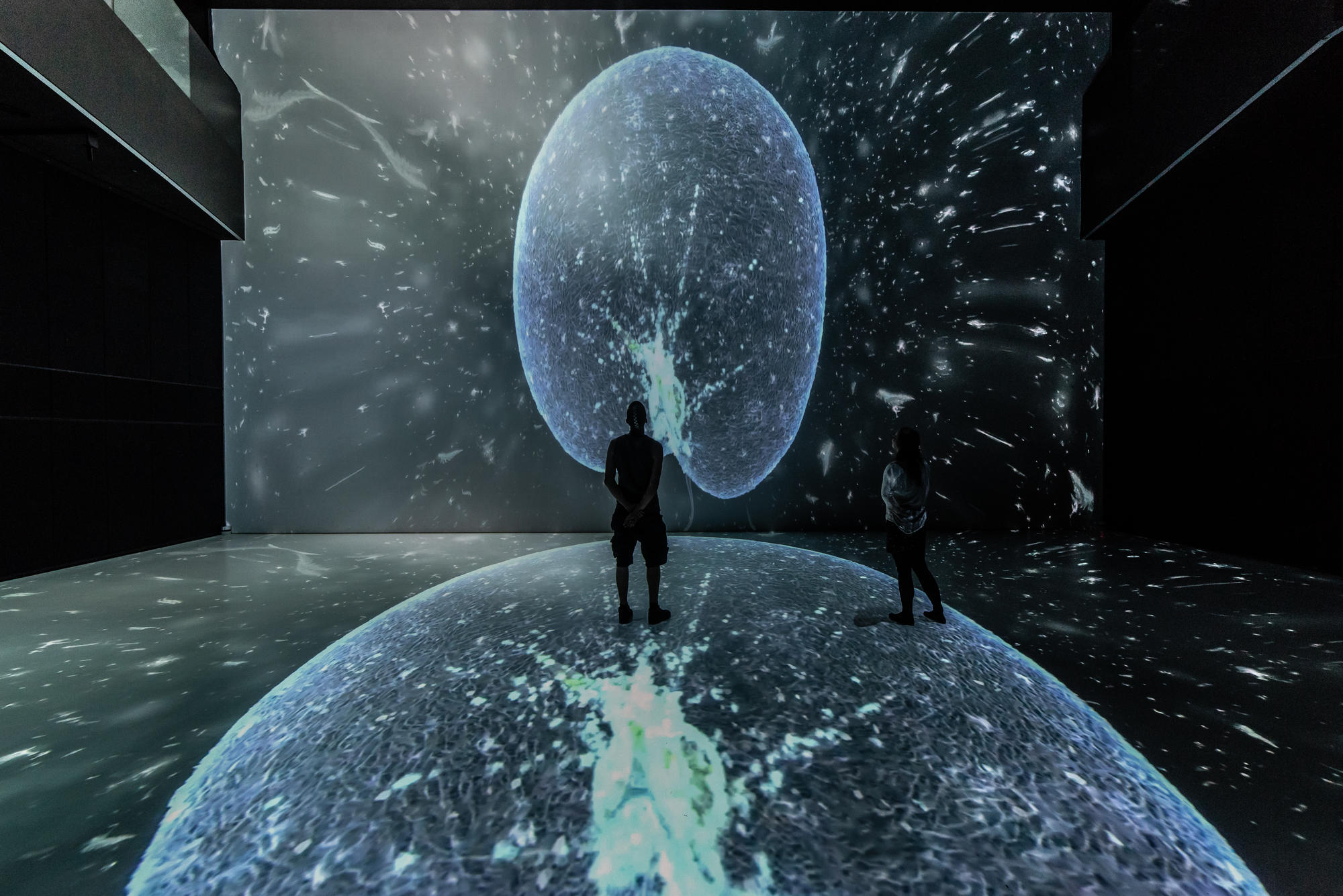 Our Time on Earth looks to transform the conversation on climate emergency. Harnessing the power of global creativity, it presents radical visions and possibilities for the future of all species.

This major exhibition of art, science, design, music and philosophy invites you to experience different global perspectives on our shared planet, and consider Earth as a community we all belong to. Interactive experiences, immersive installations and digital works come together to take you on a journey of self-reflection, discovering how technology can connect us to the natural world and leaving you feeling empowered to make positive change.

Artists, activists, researchers, writers, designers, scientists and more highlight the need to work across borders and disciplines to urgently tackle climate change together. By reigniting respect for our beautiful and complex planet Our Time on Earth will challenge your existing opinions on the most important issue of our lifetime.

The Science Visualization Lab of the University of Applied Arts has been treading new paths for many years to make science tangible and visible. For this purpose, the design tools of computer animation, documentary film and immersive experiences are used in a variety of ways to convey scientific information and images. The presented videos show the lab’s most successful projects, but also their development paths and underlying data. As an example, not only the micro and nano world, but also the path as a destination becomes visible. Size scales that are invisible without technical aids can be made tangible through digital data from our very physical world. The projects shown are LIFE and NOISE AQUARIUM, which deal with the effects of plastic and noise pollution on plankton, CRISPR/Cas9-NHEJ: ACTION IN THE NUCLEUS, which deals with genetic manipulation and VIRUS DICE, which presents the SARS-CoV-2 virus and our existence as a function of relationships with different probabilities. 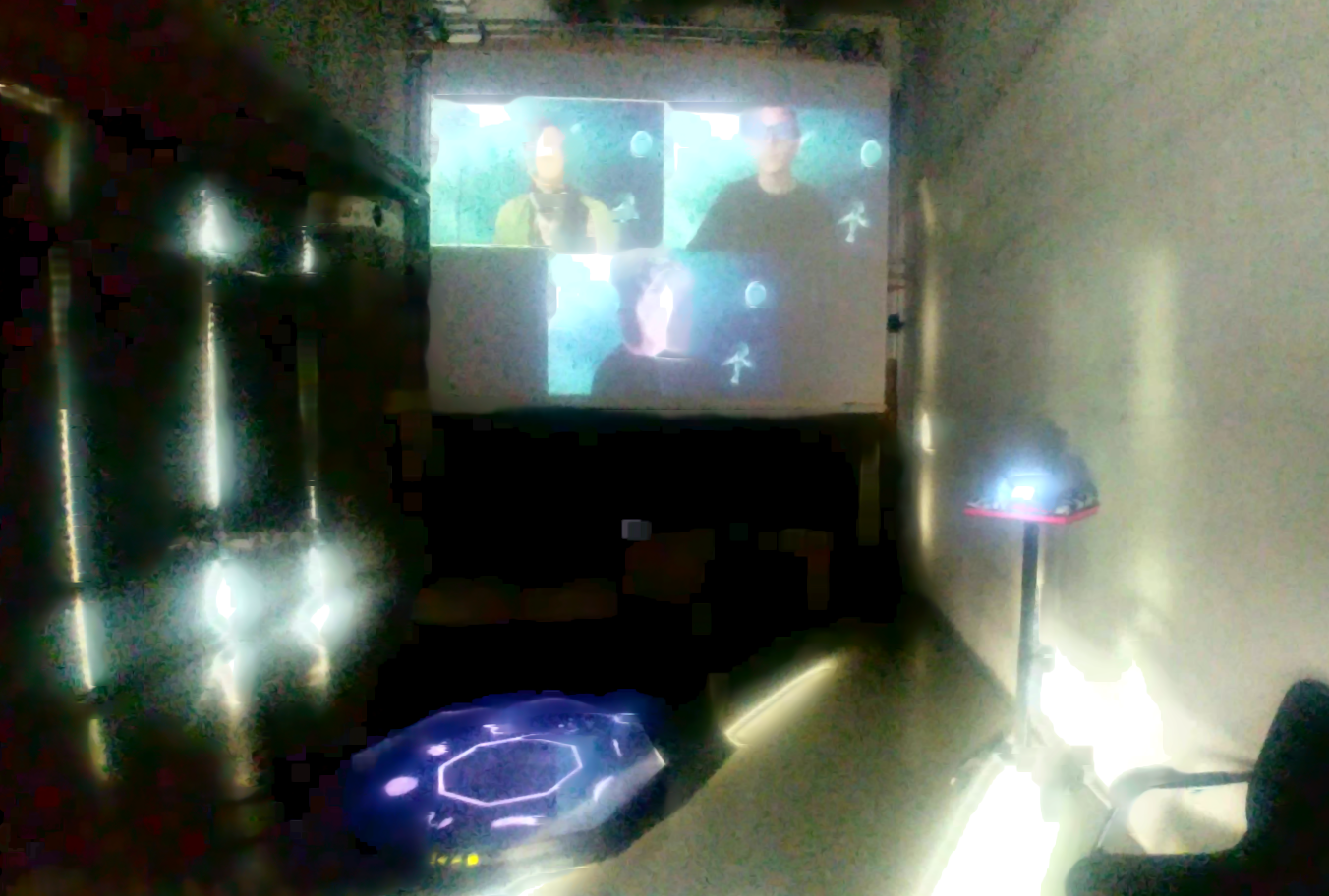 Walking and breathing meditation led by Anna Nacher and members of the Art Sci collective. Audiences are required to RSVP and encouraged to record and add 30 seconds of their breath to the growing BREATH LIBRARY!

Through a simple act of breathing we may participate in the whole range of scales and time flows: for the terrestrial atmosphere, a given water molecule, the one we breathe in and breathe out as oxygen, might spend in the atmosphere 15-23 days on the average. What if the way we breathe and vocalize impacts the water cycles? Can we turn our bodies into water cycles measuring units and the instruments of cooperation with weather patterns? What if even the tiniest movement of the oxygen in our nostrils and lungs and even the slightest resonation of the vocal cords, chest, and abdomen can affect a rainstorm? Meditating on such questions may provide an interesting departure point for both scientific inquiry and embodied practice of breathing and vocalizing.

COVID-19 has made breathing a struggle across the planet. This meditation turns our minds to nature’s oxygen powerhouse.

80% of our oxygen is produced by plankton. 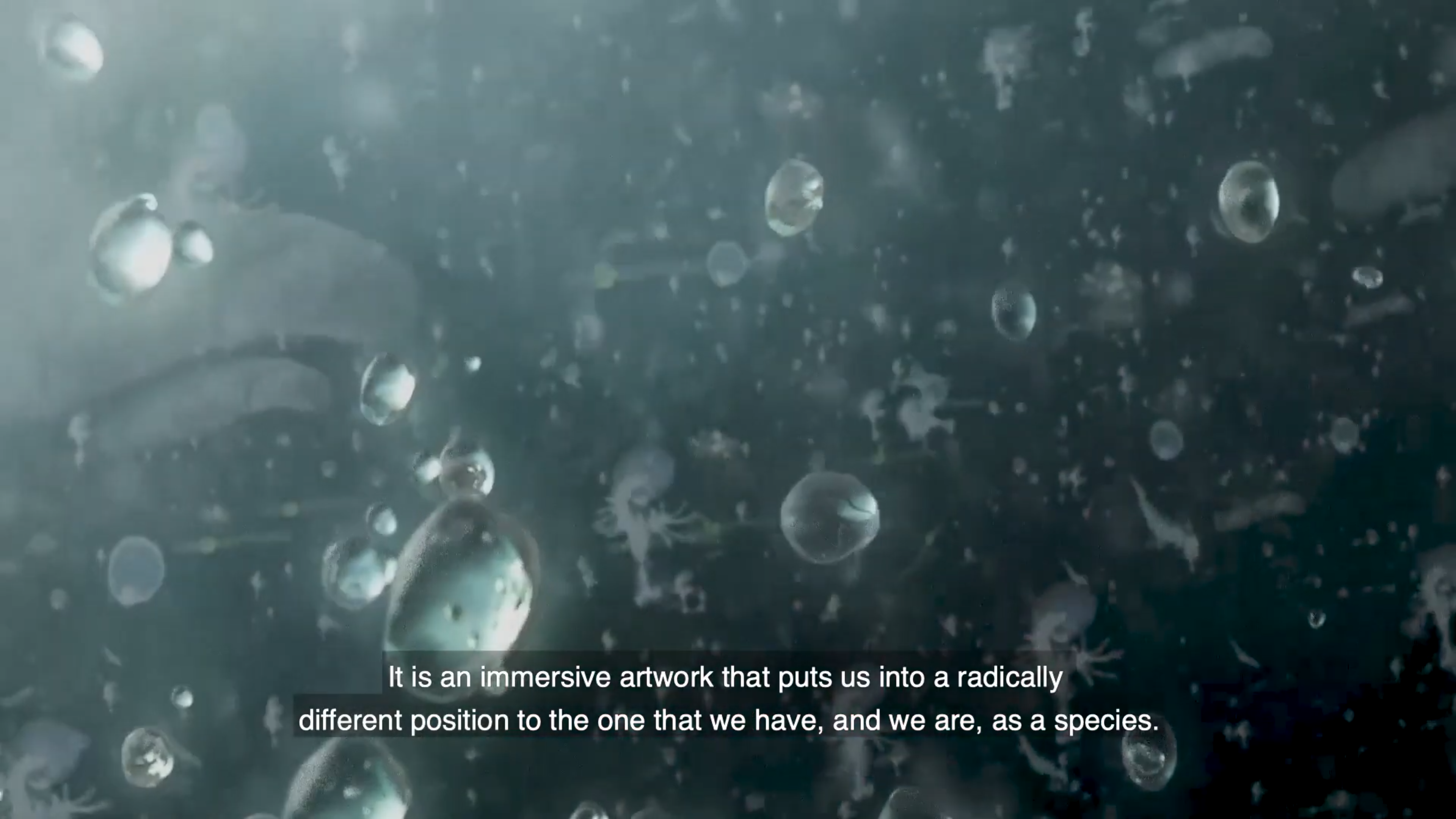 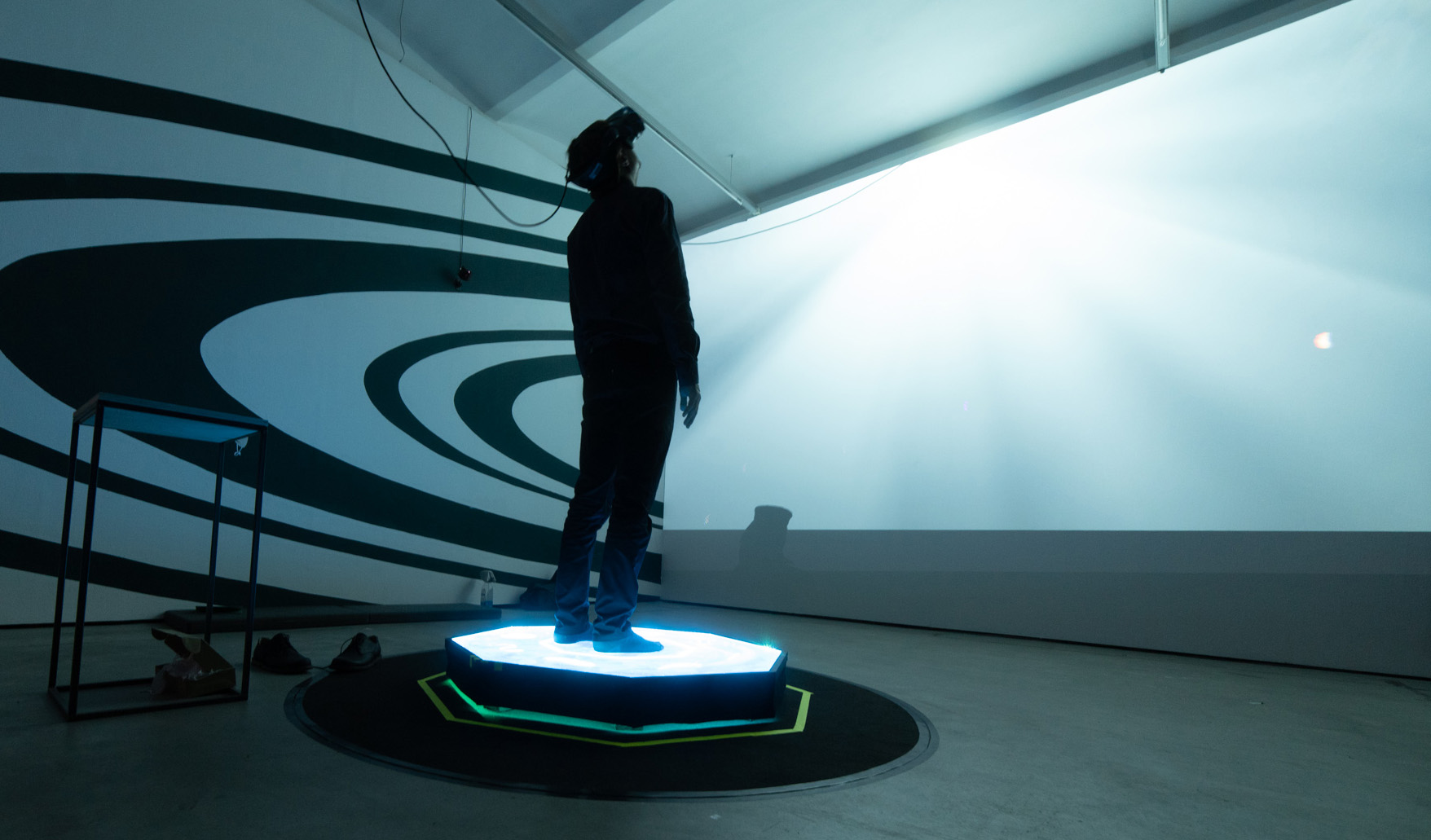 Noise Aquarium will be part of the first Wiener Rauschen Audio Visual Festival in Aspern Seestadt Vienna from 24-26th September 2020. The installation can be experienced as VR and sound installation in the local exhibition space Jot12. 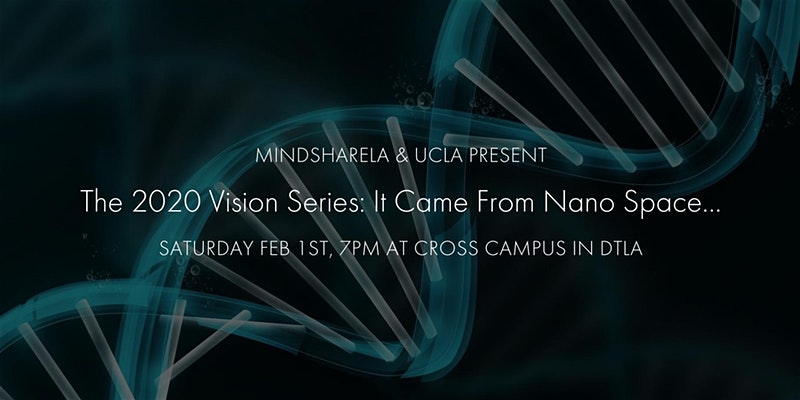 The 2020 Vision Series is a four part journey that MindshareLA is producing in collaboration with UCLA so please join us for the inaugural event as we collectively explore how the smallest things can have profound implications on all of our lives.. 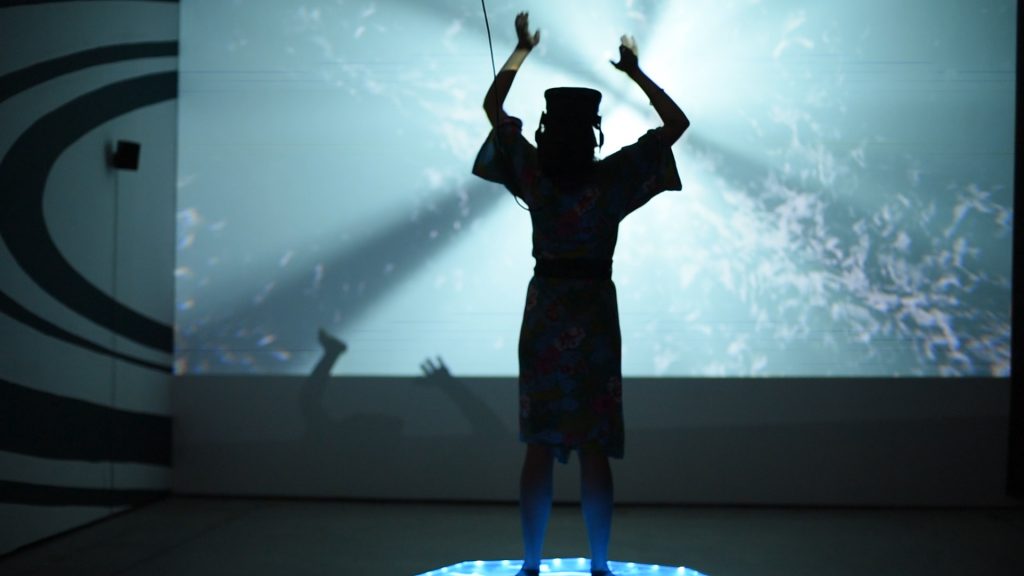 Throughout our existence, time is of the essence. When feeling good, we have the time of our lives, while particular challenges give us a rough time. At times our part- and full-time jobs make us feel like we live on borrowed time. Perhaps time to call it a day? And after each timeout we start again, one step at a time, staying focused on that one idea for the time being. But we as a whole are in a race against time and time is running out for solving some of our most pressing challenges! 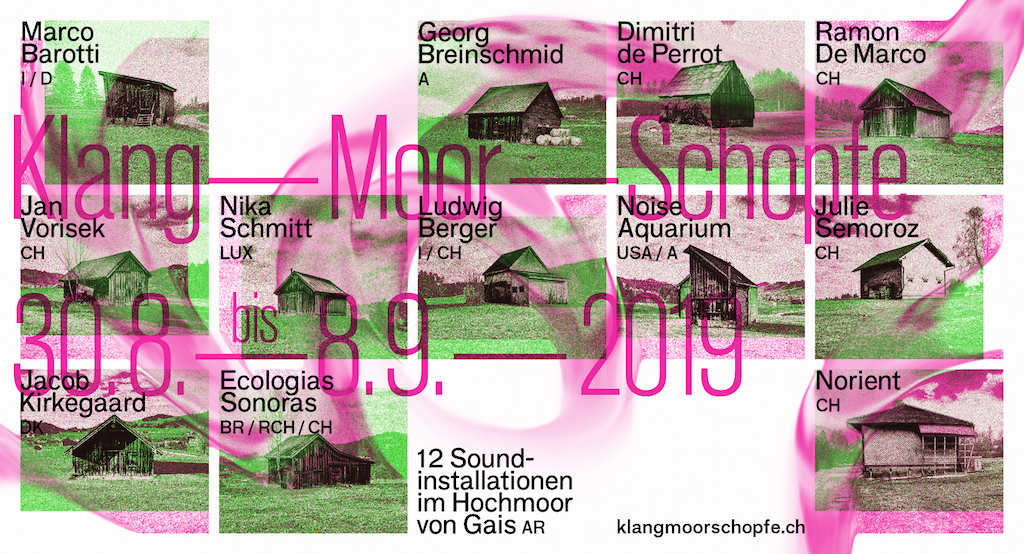 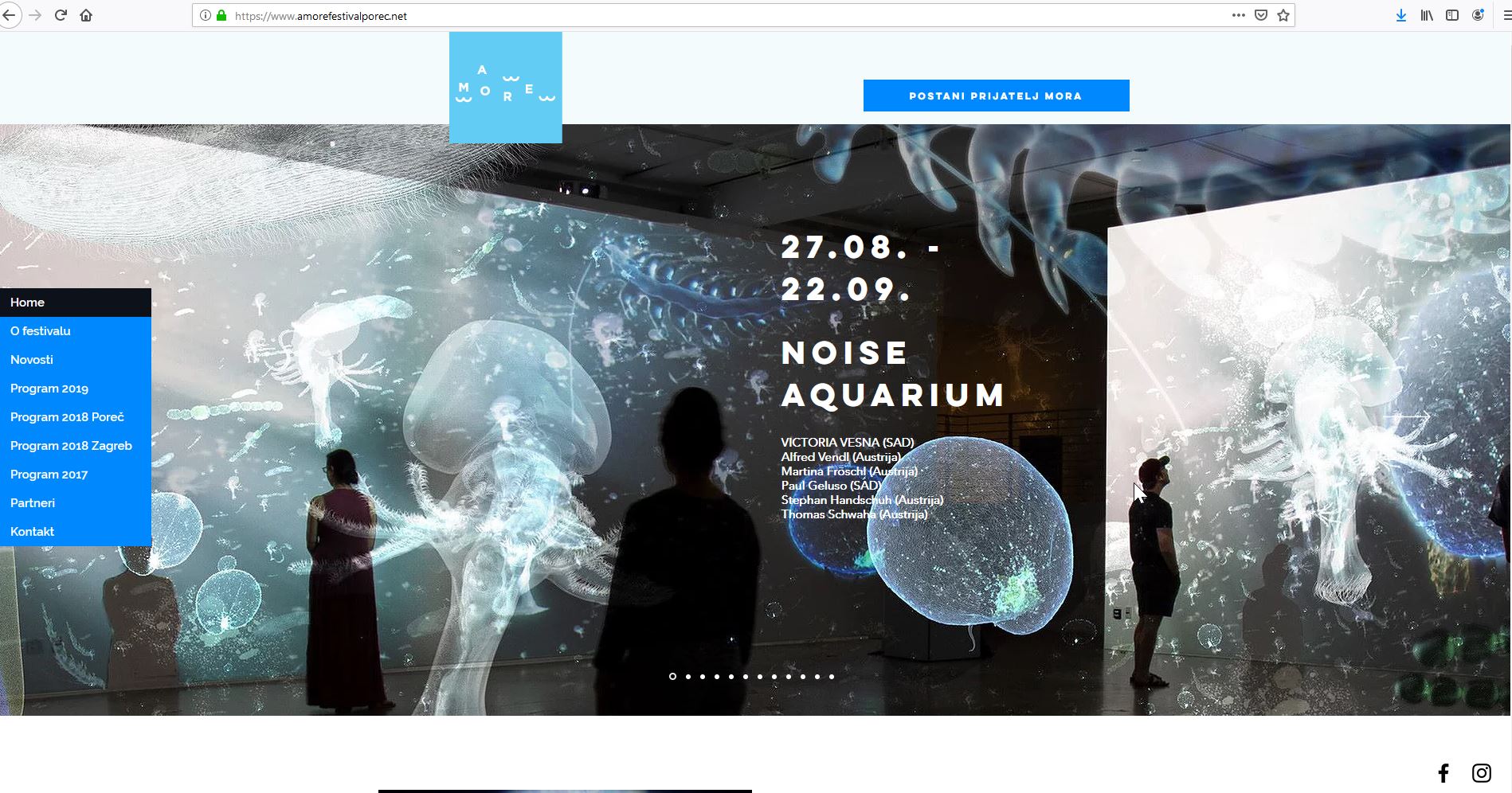 Noise Aquarium installation at Vienna Biennale 2019: Change Was Our Only Chance 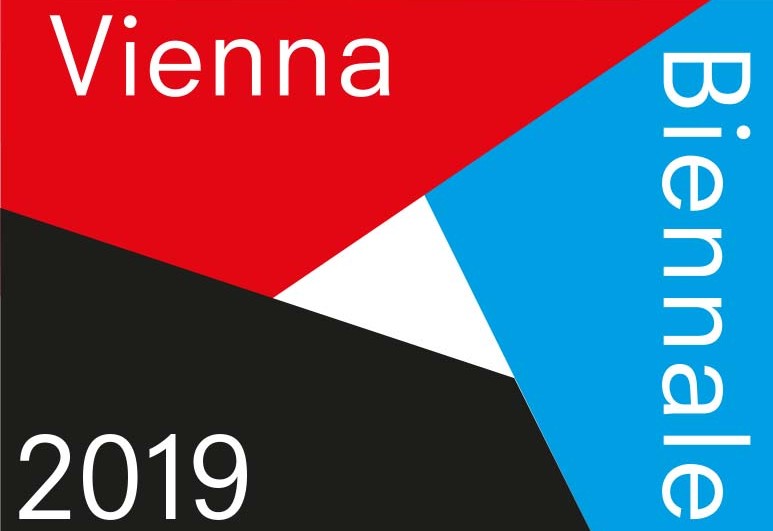 The interactive installation Noise Aquarium shows us deep changes in our ecological system. The interdisciplinary, collaborative project that was developed in collaboration of the ArtSci Center UCLA and the University of Applied Arts Vienna, creates an audio-visual experience in which plankton are brought to life and the noise that poses a threat to marine life is made audible.

We are winners of the Raw Science Film Festival 2019! 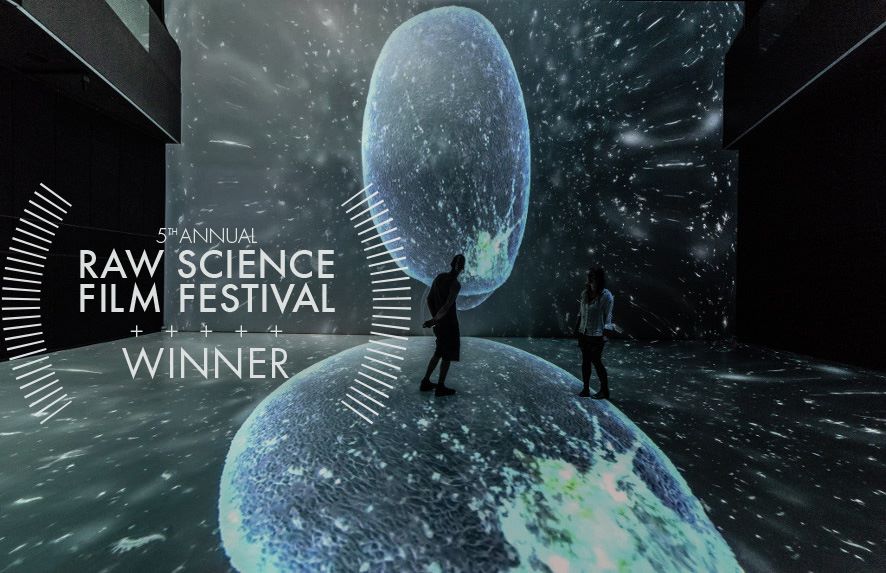 The festival honors films on science and technology worldwide. Categories include fiction and non-fiction for both students and professionals. Cash prizes are awarded. Animations and infographics are welcomed. The film screening and awards ceremony takes place in January, 2019. 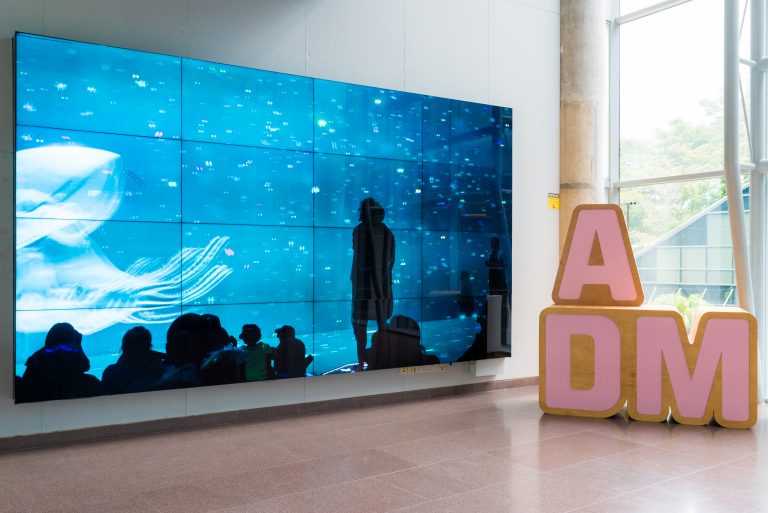 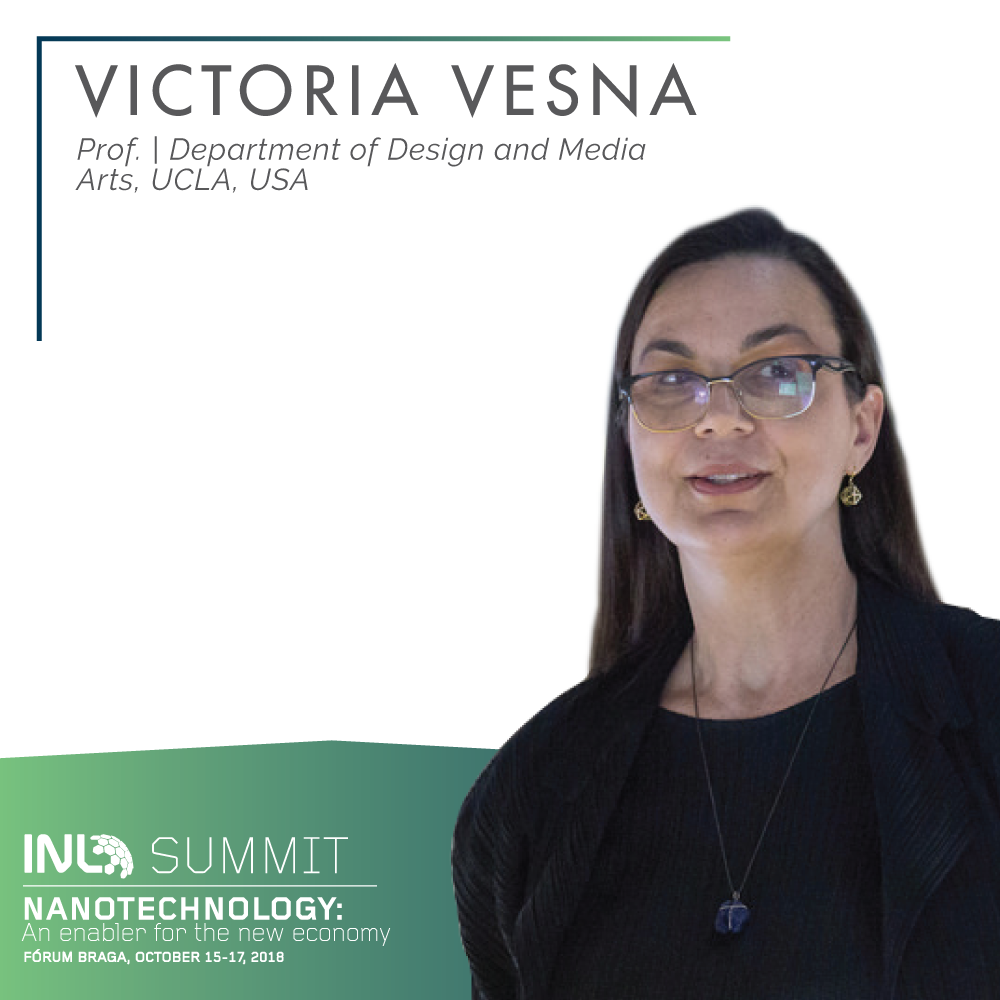 Both artists and scientists act on their curiosity by identifying an inquiry and taking steps to discover or express the unknown. Join our cohort of experts in discussing the intersections of art and science. 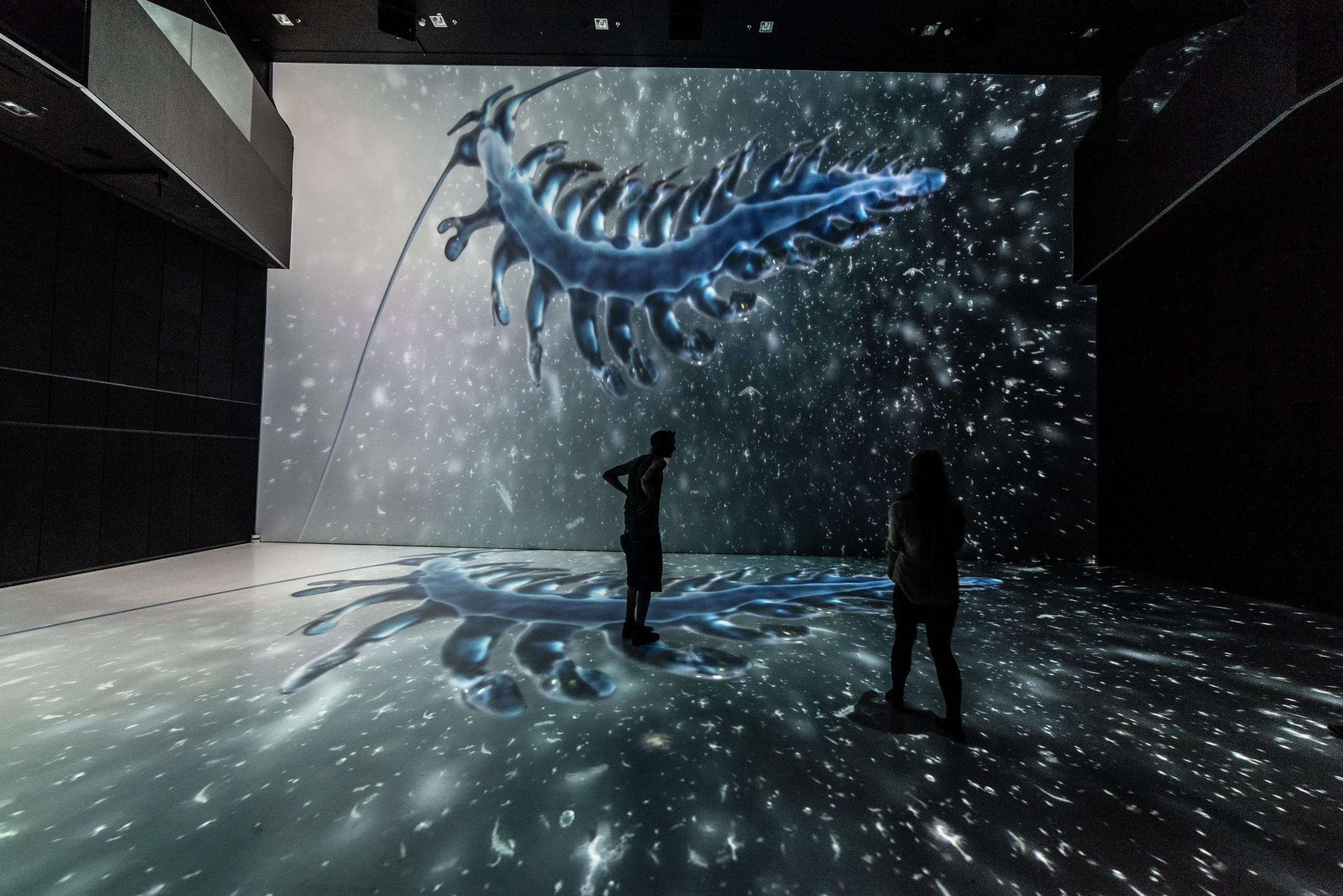 Current scientific studies have shown with shocking examples that noise sources such as sonar and fracking are extremely harmful to large marine life. Noise also affects microscopic organisms such as plankton, as Victoria Vesna and her collaborators show in their interactive installation in Deep Space 8K at the Ars Electronica Festival 2018, where Victoria Vesna transforms the Deep Space 8K into an aquarium for visitors. 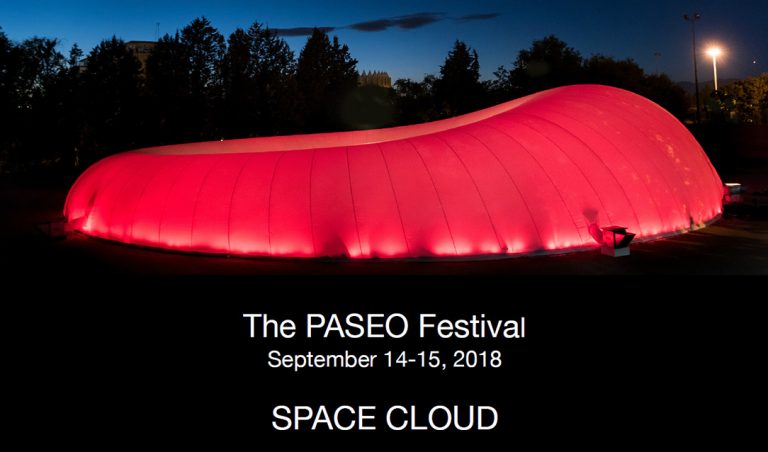 Noise Aquarium utilizes 3D-scans of these micro creatures obtained with unique scientific imaging techniques immersing the audience in a 3D ‘aquarium’ of diverse planktons projected as large as whales. Participants create destructive visual and audio noise by their presence alone as we are all implicated by our inaction. 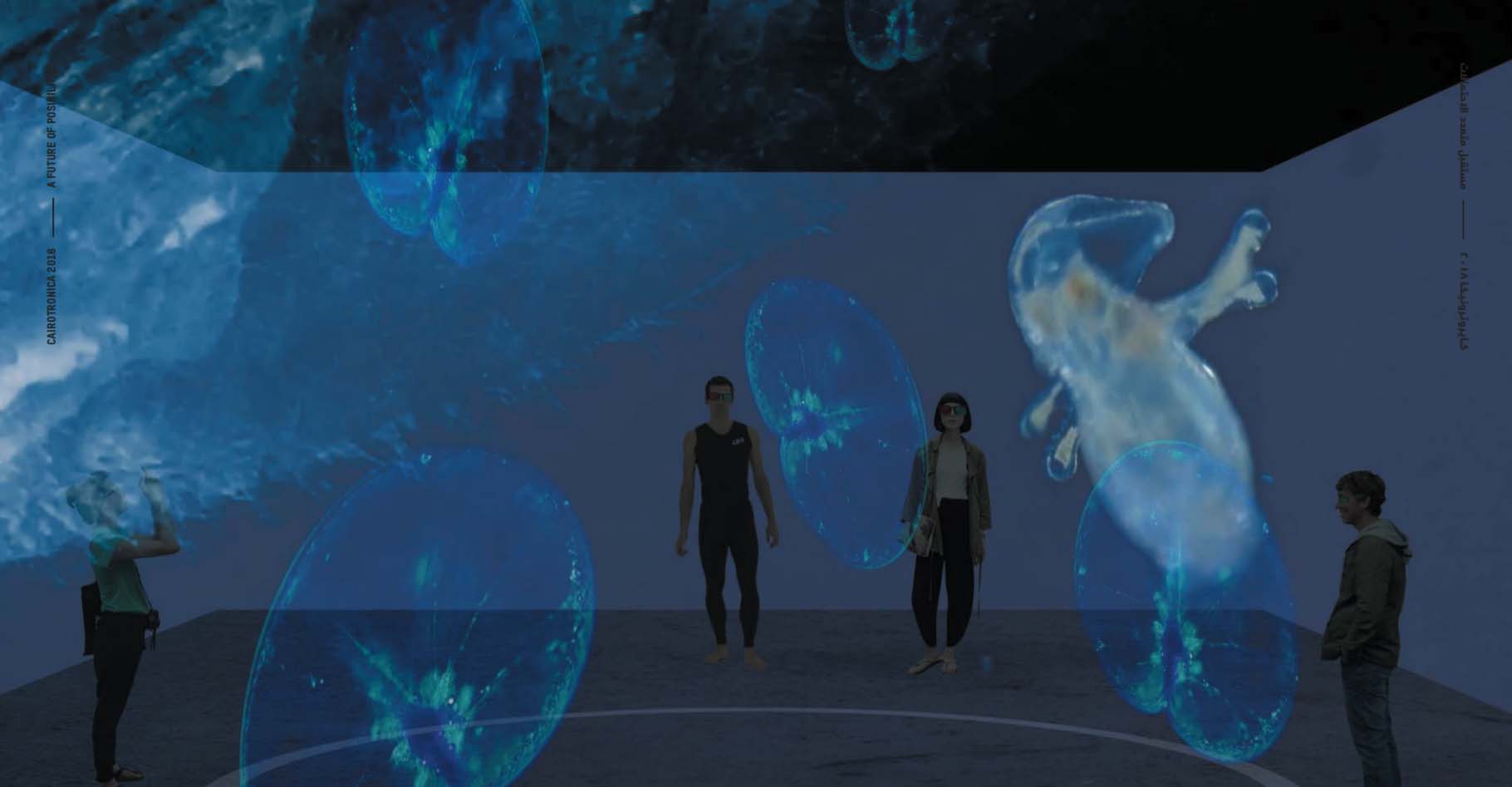 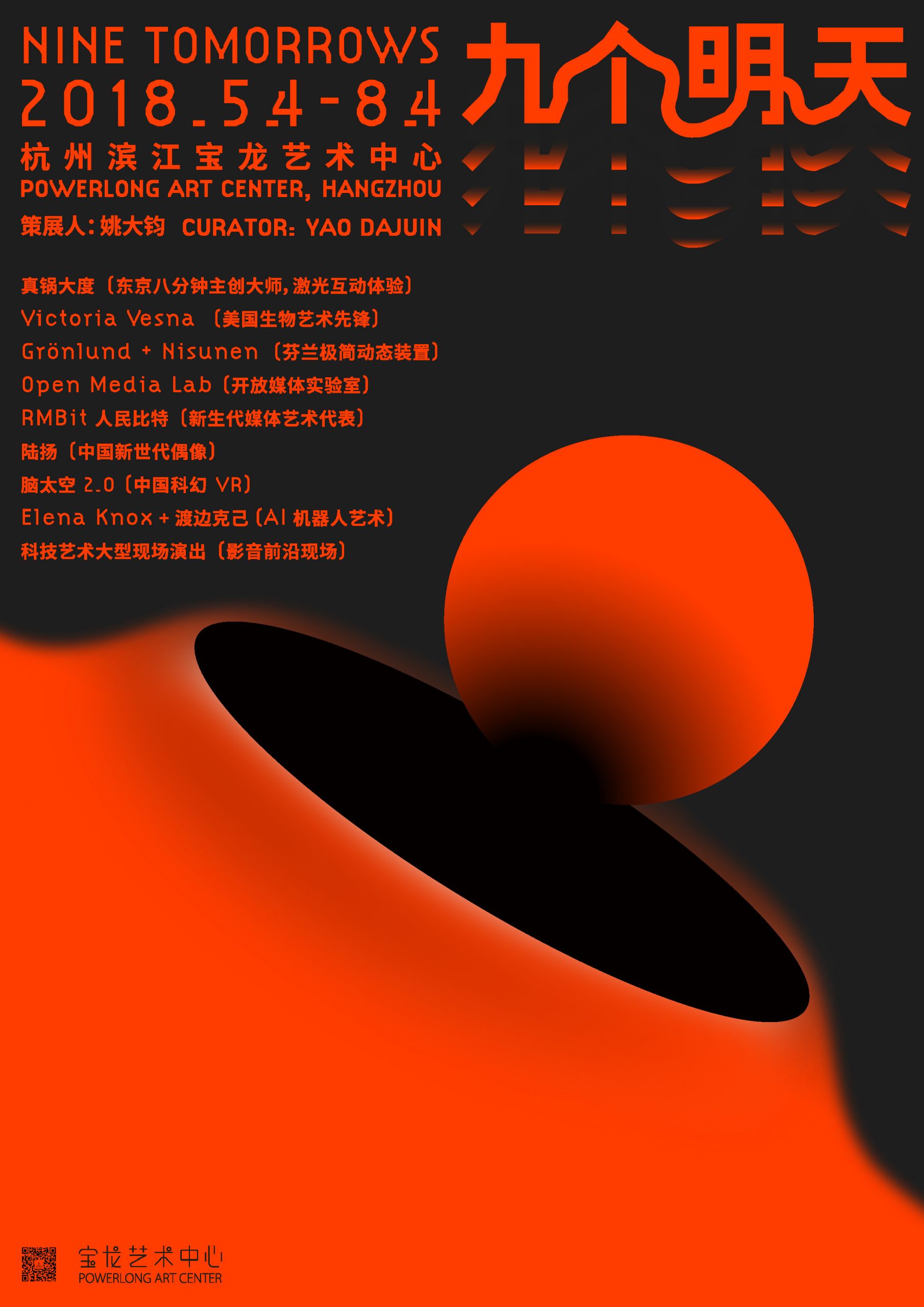 Noise Aquarium at I love life: Celebrating Biodiversity through Art and Science 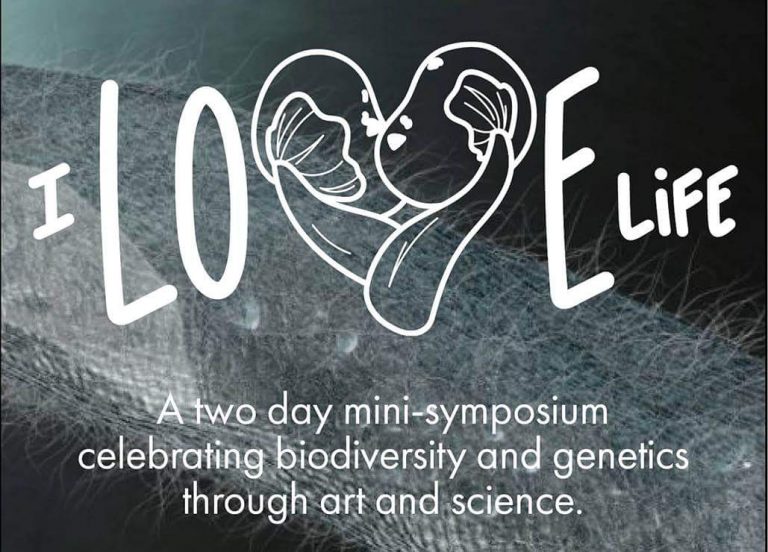 Noise Aquarium was proud part of the two day mini-symposium  ‘ I love life: Celebrating Biodiversity through Art and Science’. The gathering explored art, science, and community issues. Guests and local experts and musicians joined the vivid conversations.  Besides noise pollution in the oceans the topics were ‘The Universe as Operating System’, ‘The Origins of Life’, and ‘New Mexican History through DNA’. The event was hosted by the Santa Fe Art Institute.

Noise Aquarium will be screened as part of a programme on MAN (Media Art Nexus) at NTU Singapur throughout the year 2018. And there is an awesome epilogue video of the symposium (onoff100101010.com) available! 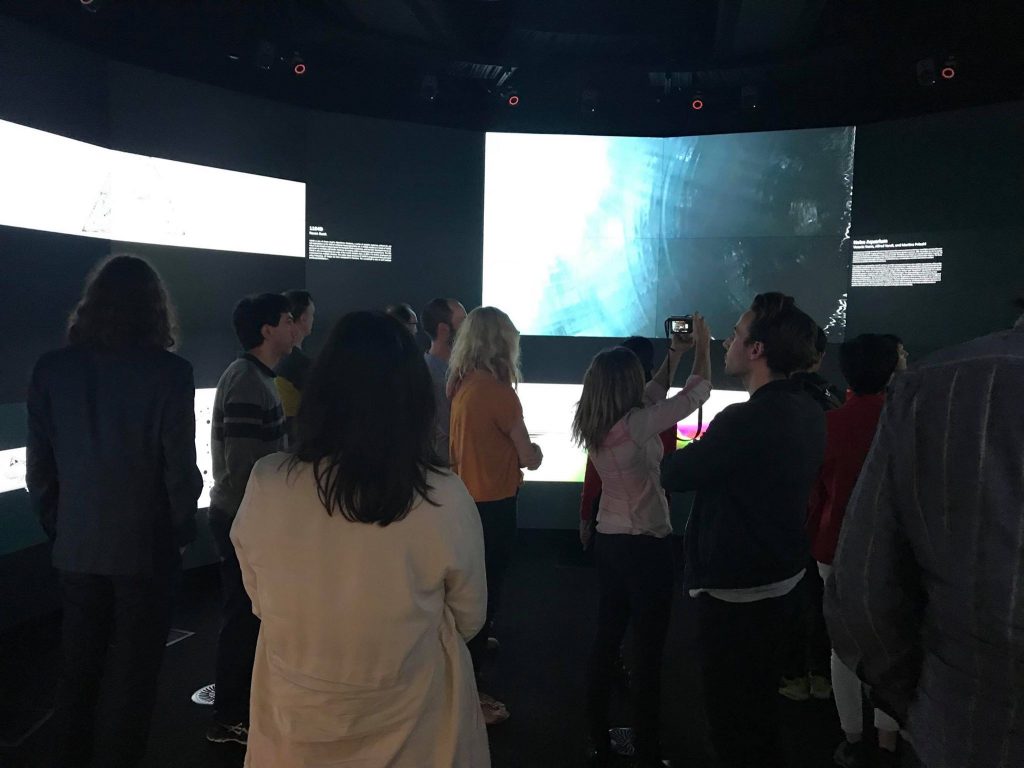 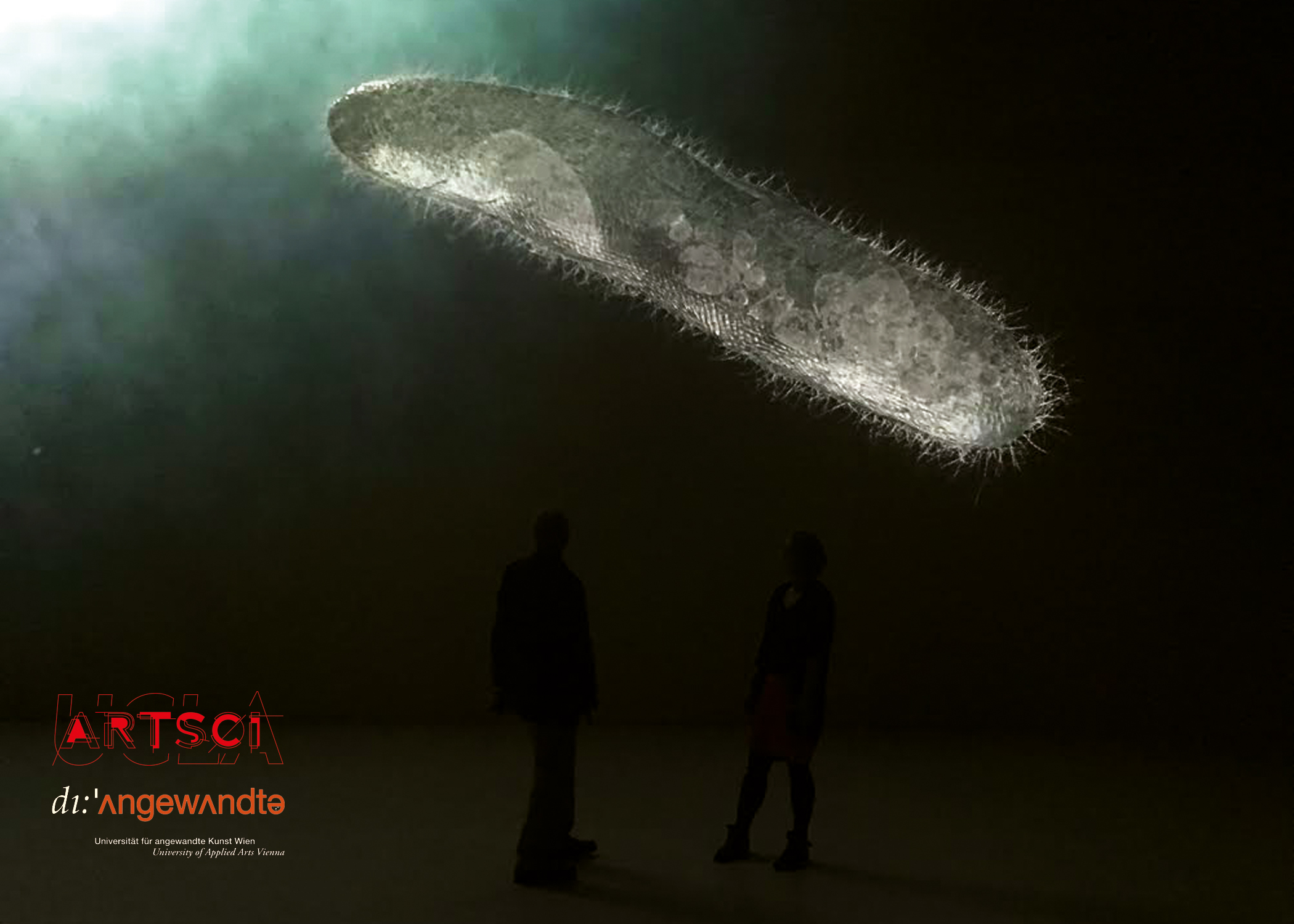 Artist Victoria Vesna of UCLA Art Sci Center, in collaboration with Dr. Alfred Vendl and Martina Fröschl, of the Scientific Visualization department at the Academy of Applied Arts, Vienna, bring Noise Aquarium to TEDxMB. Noise Aquarium draws our guests’ attention to unnatural noise in the oceans on plankton, one of the primary building blocks of the marine food chain and a crucial component of the Earth’s ecosystem. By showing disturbance through noise pressure waves, this intriguing video of accurate 3D-models is a vital resource for scientific and artistic research. Immerse yourself in our Noise Aquarium video lounge!

On July 6, 2017 the symposium on “Fluid Visualisation and Sound Matters“ will bring at the Angewandte Innovation Lab (AIL) together artists, scientists, and experts working in the field of scientific visualisation and visual effects to develop a cross-disciplinary understanding of how art and science contribute to raising awareness of the current massive ecological crisis of marine ecologies and identify a suitable epistemological framing for this global challenge: Overfishing, pollution, acidification, and rising temperatures due to climate change are the main factors that have been putting tremendous stress on marine ecologies for decades.
Continue Reading 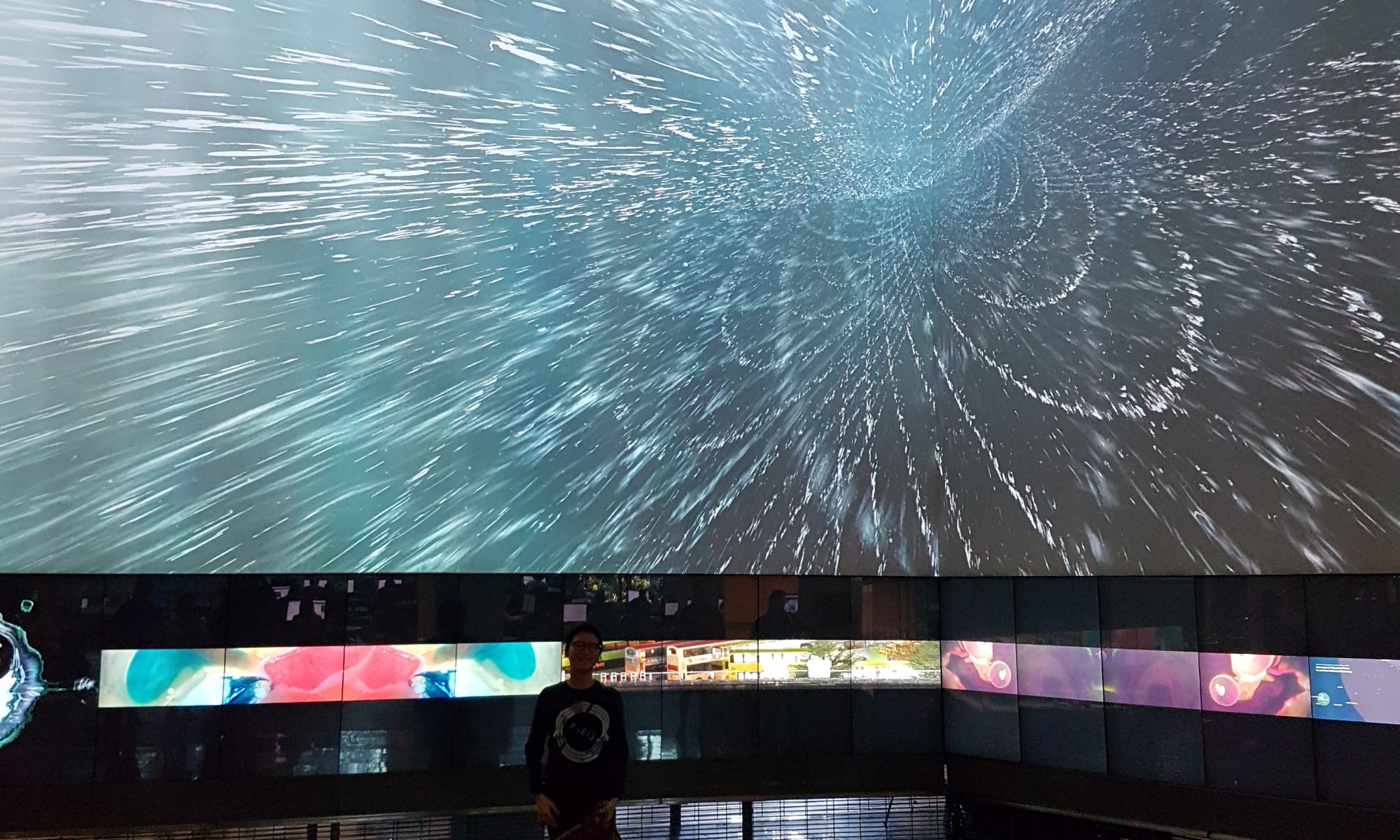 NOISE AQUARIUM premieres June 5th, 2017 as a featured project at the WEB3D Art Gallery ON | OFF: 100101010 in Brisbane, Australia for the 22nd International Conference of 3D Web Technology.