SEVEN MICROSCOPIC ORGANISMS WERE TOMOGRAPHICALLY SCANNED AND THEN TRANSFORMED INTO DIGITAL THREE-DIMENSIONAL MODELS FOR NOISE AQUARIUM.

In the following, the portrayed planktonic creatures are briefly introduced.
All rights reserved to Science Visualization Lab of the University of Applied Arts Vienna

Amoeba is a single celled-organism which displaces in a typical ameboid way. It is usually 220 to 760 μm in size. The cytoplasm is granular and often contains crystals. The nucleus is discoid or ovoid. It lives in fluids or wet places and is frequently to be found in appropriate habitats. There are also amoebae with several nuclei to find in nature [http://www.arcella.nl/amoeba-proteus; 30/6/2015].

The paramecium is an oval, slipper shaped micro-organism, rounded at the front/top and pointed at the back/bottom. It has a stiff but elastic membrane that gives the paramecium a definite shape but allows some small changes. The membrane is covered by many tiny hairs, called cilia. On the side, beginning near the front end, and continuing half way down is the oral groove. The rear opening is called the anal pore. A contractile vacuole opening and radiating canals are also found on the outside of a paramecium. Inside the paramecium is cytoplasm, the gullet, food vacuoles, and the nucleus [101science.com/paramecium.htm; 30/08/2016].

Tomopteridae grow to sizes of 50 – 100 mm and there are around 60 species. They have deeply divided forked fin-like pods, a pair of lensed eyes, and long front tentacular cirri. Tomopteridae are amongs the few marine animals with yellow bioluminescence. They have a predatory lifestyle and mostly feed on chaetognaths, tunicates and fish larvae [http://www.imas.utas.edu.au/zooplankton/image-key/annelida/tomopteridae; 18/2/2017].

Noctiluca scintillans size range 0.2 – 2 mm, typically they are about 0.5 mm in size. The organism has a balloon-shaped cell with oral pouch, a short flagellum and a tentacle. The ballon-shaped cell is filled with cytoplasm and can cause spectacular bioluminescence. It lives mostly in costal waters. It digests organic matter but can also synthesize own nutrients like plants. It is prey for many and feeds on diatoms and various eggs [http://www.imas.utas.edu.au/zooplankton/image-key/noctiluca-scintillans; 18/02/2017].

Before 1960, the organisms we know today as bacteria were called blue-green algae. They were classified along with the green algae, the red algae, and the brown algae as photosynthetic microbes. It was universally agreed that all of these carried out green plant photosynthesis, fixing CO2 and generating O2 from water. But in the 1960s it became apparent, from new biochemical evidence, that the blue-green algae, unlike the other algae, are really bacteria: they are sensitive to penicillin because of their peptidoglycan cell walls; they have bacterial-sized ribosomes sensitive to the usual antibiotics; and they do not contain organelles such as chloroplasts and mitochondria. A major consequence of the name change was to remove this vast array of organisms from the realm of botany and to put them into the microbial world [http://www.cell.com/current-biology; 04/04/2017].

Actinotroch is one of the largest larvae in the oceans (0.6 mm to over 2.5 mm) and belongs to the horseshoe worm familiy (Phoronidae). It has an umbrella-like upper body region, a middle body collar and a ring of tentacles. The metamorphosis is very special and fast, it lasts 15-30 minutes, before that actinotroch lives for weeks in plankton [http://www.imas.utas.edu.au/zooplankton/image-key/phoronidae; 18/02/2017].

Oikopleura species belong to the planktonic tunicates and posses a specialized, external filtering system that extracts food particles below Micrometer size. The digestive system of an Oikopleura consists of three different main cell types. Ciliated cells transport the food and absorb nutrients. Oikopleura secrete a complex, gelatinous cave called “house” which they inhabitat and use for creating food particle streams. These filter houses interest researchers and have been studied of different species of the genus. The house works when the animal uses its’ beating tail to create and concentrate a nutrition particle stream. Food is trapped by a mucous net and digested [https://onlinelibrary.wiley.com; 06/04/2017].

The Augmented Reality Platform For Art [Artivive] makes it possible to watch the animations on your mobile device. Just install the Artivive App from your AppStore and hold the device in front of this image. 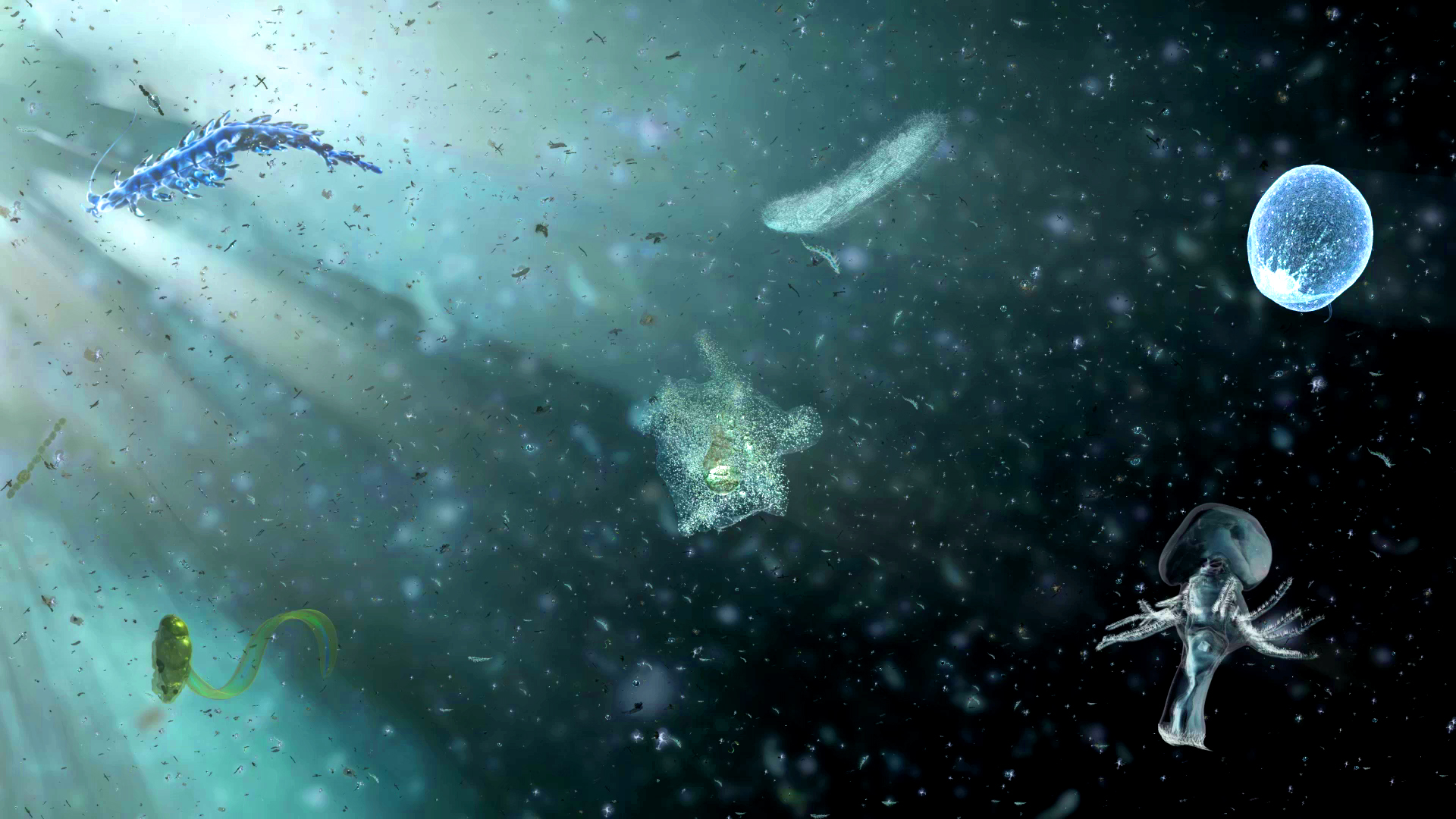